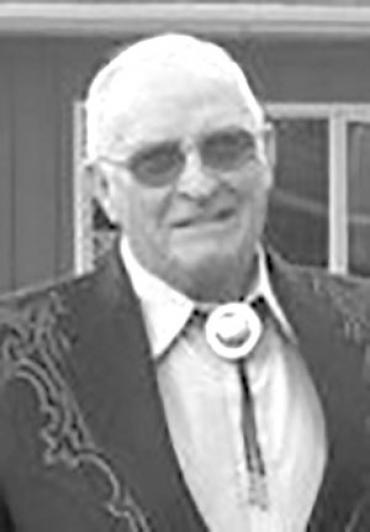 Terry Dennis Becker was born July 17, 1937, the son of Henry and Helen (Gregor) Becker. He graduated from Neillsville High School in 1955 and joined the Army National Guard. He served with the 32nd Division and was activated during the Berlin Crisis. He was honorably discharged with a sergeant rank. On Dec.1, 1956, he was united in marriage to Joyce Mashin. Terry worked for Svetlik’s Ford Garage until 1965 when he was hired to run the Holiday Station store in Neillsville. He would later buy Holiday and operated that for 27 years before selling in 1992. Terry went on to work at Jensen’s Ford Dealership as a certified Ford salesman for 20 years while also doing some farming and raising beef. He also served on the board of directors for Neillsville Memorial Hospital and was a member of the Winx Club, Brushy Ridge Irregulars and Immanuel Lutheran Church of Globe. Terry loved life, his wife and daughters and their families. He also loved hunting, fishing and horses especially Cody, who he took out west hunting in Wyoming every fall.  He also liked all of his black dogs, Jack, Winston, Ace and Jack 2. Terry enjoyed riding his Harley-Davidson and traveling to New Orleans, California, Wyoming, Florida and their 50th wedding anniversary trip to Alaska.

Preceding him in death were his parents and daughter, Tammy Becker.

A memorial service will be held at 11 a.m., Friday, Dec. 9, 2022 at the Gesche Funeral Home in Neillsville.  Pastor Nathan Wilke will officiate. Military honors will be presented by the Neillsville Veteran’s Council. Visitation will be held from 10 a.m. to 11 a.m. Friday morning prior to the service at the funeral home.

In lieu of flowers, donations can be made to the Clark County Humane Society, PO Box 127, Neillsville, WI  54456.